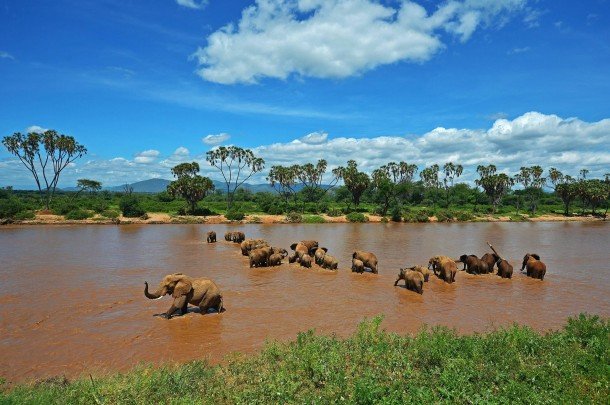 Samburu national park was established in 1948 initially as the marsabit national reserve and it was gazetted in 1961 and with the recommendations of the then warden that the enclose north of the river be set aside as a game reserve as well. It was fully established in 1962 with a size estimated to be around about 165 square kilometres encompassing even local community group ranches like Motiok and Gwesi then the private ranches like El Karama, Loisaba, Lewa, Borana and Mugie, making it relatively smaller in size in comparison to other Kenyan parks like the mighty tsavo national parks let alone masai mara national park but like they say worthy things come in small packages so is Samburu national park.

Samburu national park generously without reservation gifts its visitors with an exclusive untouched wildlife theatre that consists of an untamed scorching rugged semi desert savannah grassland, volcanic rocks land scape dotted with several termite skyscrapers snaked through with an overwhelmingly 98° in the shade river Ewaso Ng’iro that means brown water in the Samburu dialect snaking through it on its southern border that separates it from the northern neighbouring conservation reserve of buffalo springs reserve that can is normally an extended visit of Samburu national park.

Ewaso Ng’iro river is the heartbeat of Samburu national park since it nourishes the feel good to the eyes plush oasis vegetation of the riverine forests of large doum palms, acacia trees and thorn trees not forgetting the opulent pastures well lined as if choreographed on its banks all the way from the Kenyan highland to where it discharges into the renowned swamp of Lorian amidst a purely dry red dusty perched background creating a beauty unsurpassed in form of a marvellous short of heavenly scenery within a backdrop of revered mountains of Ololokwe and Koitogor.

Samburu national park is jam-packed with animals like the northern species of the Reticulated Giraffes towering up the shrubs munching away to the shrub thorns and leaves, Grevy’s Zebras going about their nourishment, the rare species of long necked gerenuks the giraffe wannabes of Africa imitating their idols, cooling off hippos and Nile crocodiles camouflaging in the mash expansive muddy river banks waiting to charge in on any intruder, the broad-shouldered antelopes quenching away at the river ,stunning monkeys swinging high across tree branches, Cheetahs strolling the open plains, Lions patiently laying low waiting for prey to drop guard at the riverbanks, leopards wandering the forests habitually sighted in the evenings, grazing buffalos Beisa oryx, packs of African hunting dogs and many more other animals in large numbers more than any other park in Kenya which makes Samburu national park a fantastic wildlife holiday destination in Africa.

Samburu national park is a bird haven with over 350 bird species registered in the park inhabiting the swamps and forests of the river banks of Samburu notable being the Somali ostriches, kingfishers, guinea fowls, Vinaceous Doves and Palm Nut Vultures.

Samburu national park is named after the semi nomadic Samburu people who are the cousins of the masai people. Their lifestyle and way of life has basically remained unscathed by modern lifestyles and ways of life and they have been very fundamental in anti-poaching programmes and conservations in this Samburu plain, so a visit to the primal and vintage Samburu villages will offer an experience of this timeless culture, traditional life style and way of life that is astonishing. An African safari tour that will go a long way in conserving the Samburu national park since all the fees paid on these cultural visits goes direct to the communities livelihood program a kind of thankyou to the community for conserving the ecosystem for the past, present and future generations to come, the incredible Samburu singing wells are a must visit here the Samburu tribesmen take their livestock to water holes and sing as they extract water from the wells creating lovely sights and sounds neither eyes have seen nor ears have heard.

Samburu national park has been dubbed the billionaires wildlife playground rightfully so since it has hosted several internationally renowned public figures like prince William, Bill Gates and Richard Branson just to mention a few as it offers an exclusive wildlife experience owing to its remoteness and being surrounded by several private and community ranches that Offer tranquil private game and birding experiences with the private ranches offering high end exclusivity and unrivalled luxury for its elite guests.

Samburu national park is a world-wide celebrated national park owing to the the star celebrated inhabitant animals it has hosted over time that have elevated it to its legendary status of a national park it is. Extraordinarily worthy of mention among the luminary star animals of Samburu national park is the extraordinaire lioness christened “Kamunyak” meaning blessed one in the Samburu dialect became famous for adopting oryx calves not once not twice but several times, raising them as her own and the calves reciprocating the love a phenomenon up until now not explained by wildlife researchers as to why it happened, leaving many bamboozled and stunned in the same breath. The park also hosted “Elsa” the lioness raised by conservationists and researchers George and Joy Adamson, the lioness was made famous in the best-selling book “born free” adapted for a block buster movie.

Top things you simply must do in Samburu NP 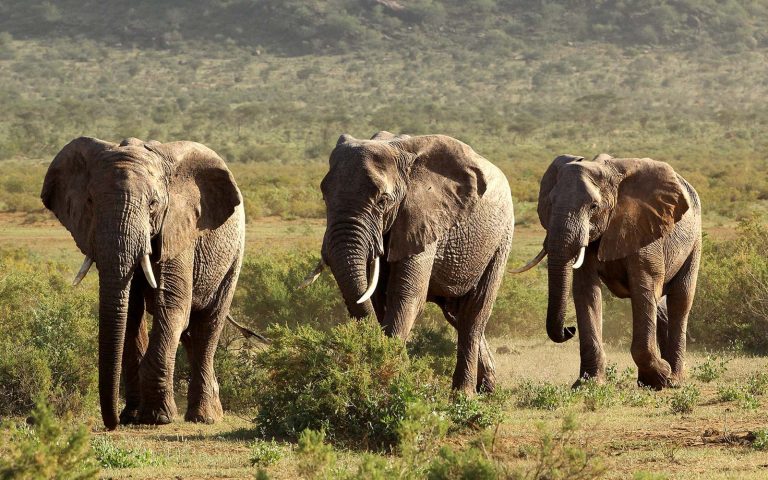 This is a must do for every visitor of Samburu national park since it has the highest population of wildlife and it’s a meeting point for the north and southern species. visitors in company of tour guides in their tour vehicles will be taken on a game viewing drive at particular vantage viewing spots to have a close up view of the animals going about in their habitat with excellent photographic opportunities. The park guides know when and where to find each of the animals that reside in the park and will guide the visitors to those spots without a fail with the best times being the morning drives and late afternoon times. Then there are the private game drives in private ranches pricey but worth every penny considering exclusivity, tranquillity and luxury and an option of night game drives that come with it. The best times for the game drives are obviously dry seasons where one is guaranteed to see all the resident animals converging on the fringes of the river coupled with thinned vegetation that improves game visibility. The dry seasons are in the months of December - March and July – October, April - June are equally a good time but with chances of rains. 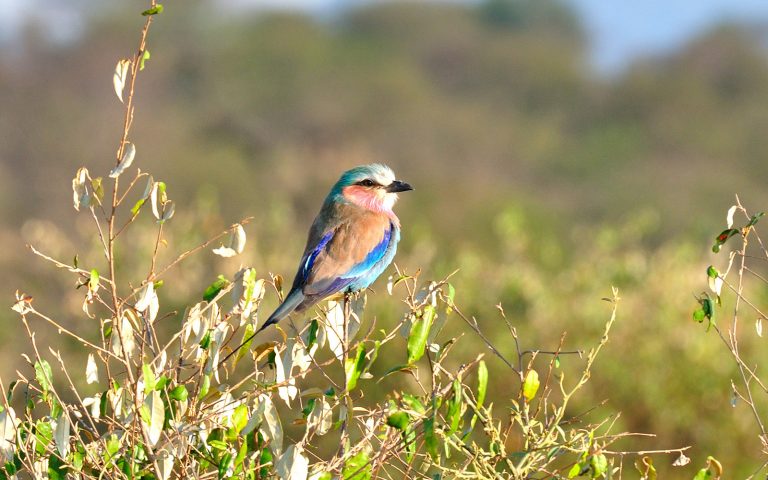 Samburu national park is birding safari destination with over 350 registered birding species residing in the park especially on the northern side of the park in the lorian swamps where swamp walks will expose one to birds in numbers an imaginable a sight that will leave any avid birder or ordinary park visitor gratified but wanting more since its habitat to an intriguing hotchpotch of birds birds like the The gangly Somali ostrich that are endemic to Africa, the chunky Dusky nightjar and the tiny Donaldson’ Smith nightjar are in plenty in the park and visitors are assured of a midnight feast of them, the cute as a button white headed mouse birds are a thing of marvel with their whipped cream hoodies are quiet a watchful here as well making morning beautiful calls relentlessly as they solar power charge with the first rays of the morning sun, the Somali bee-eater Watch them feast on insect colonies like its life depend on it with plenty of them dotted all over the park, the Golden pipit this is a brightly coloured one and the easiest to identify of its category its quite a spectacle to view, plus an array of other bird species like the taita falcon and the lesser kestrel which are a global conservation concern and other species considered vulnerable like the white-headed vulture, the yellow-billed ox-pecker, darter martial eagle and great egret then the critically endangered species like the Pancake tortoise. 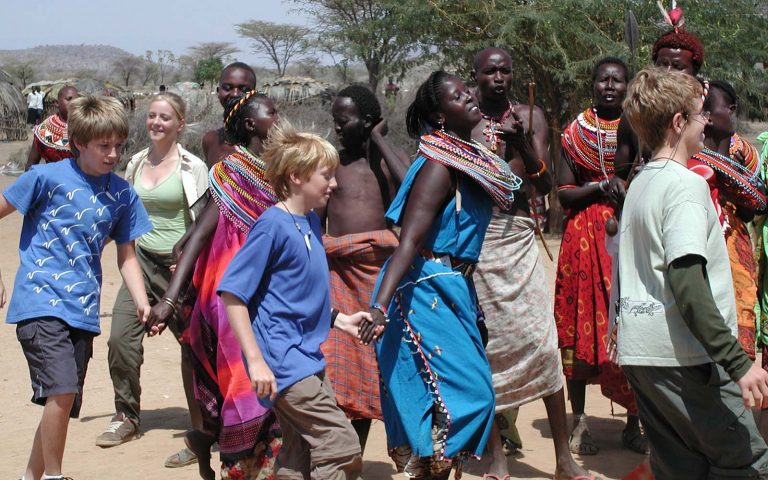 Without a doubt the masai are the most iconic tribe in Kenya however on your visit to the northern part of Kenya you will encounter their cousins who are semi nomadic with almost a similar way of living known as the Samburu whose culture has stayed clear of western influence and to a larger extent remained vintage and timeless so a visit to their villages is a must for any antique collector, ethnographer or ordinary visitor when in Samburu national park so as to immerse and get a feel of the times of the timeless ancient way of living and get authentic vintage Samburu souvenirs from the finest craftsmen of the outstanding tribe in honor of a true African a safari. 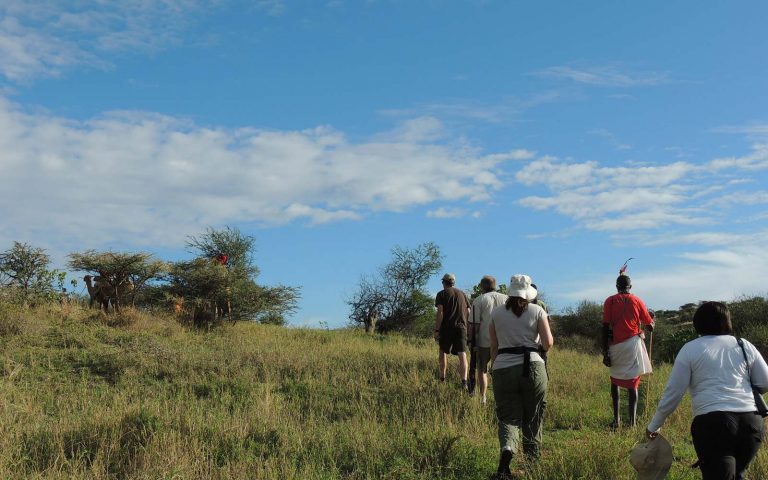 These are the inhabitants of this dusty plain and a walk with them will leave one very knowledgeable of the the riverine forests and grasslands in this area as they will generously pass on the indigenous knowledge of everything in the park they come across during the walk and how it impacts their livelihood as a people to the visitors and be ready to take alleys only they known to them since this park is their backyard and they know every inch of it and prepare your yourself for a walk to the singing Samburu wells it’s like no other. 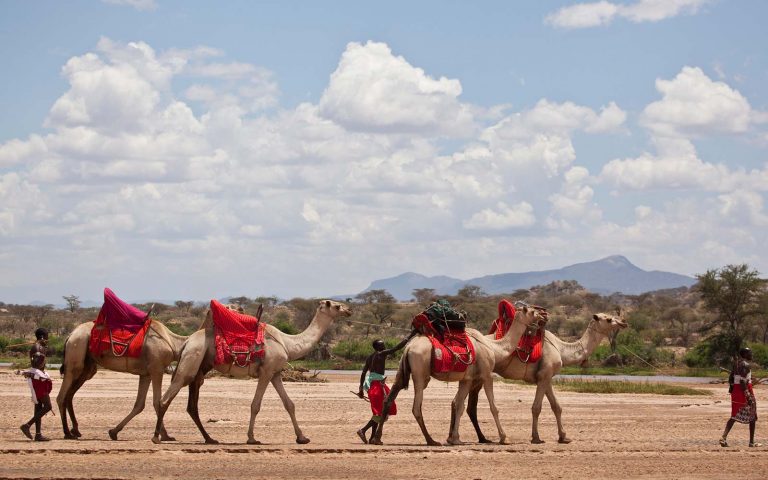 Camel and horse riding in the private ranches 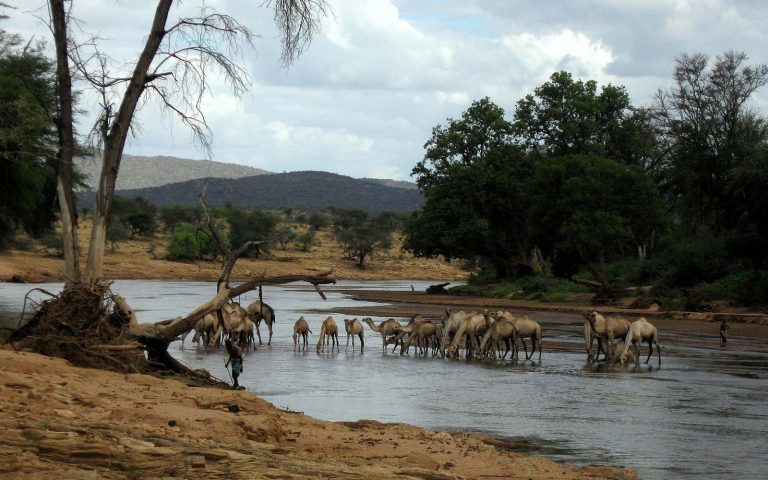 Yes, with rains deciding to pour during rainy seasons it real pours and they create quite a tide on the river in Samburu national park, Samburu visitors will grab a puddle and get in the rough waters of the river to test its might an adrenaline packed hair raising activity for the water rafting enthusiasts.

Samburu national park is an all year park but with dry seasons acing as the best times to visit and they are the months of December - March and July t- October are dry. April - June are equally dry months but with intermittent rainy bouts that are unpredictable.

This implies that ngorongoro conservation area has remarkable accommodations that overly meets the expectations of the visitors that is real value for money with several lodging facilities and camping sites right inside Ngorongoro conservation area with many majestically tucked on the rim of Ngorongoro caldera and the edge of the rift valley escarpment offering dreamlike out of this world views and colonial safari era with a touch of luxury experience. 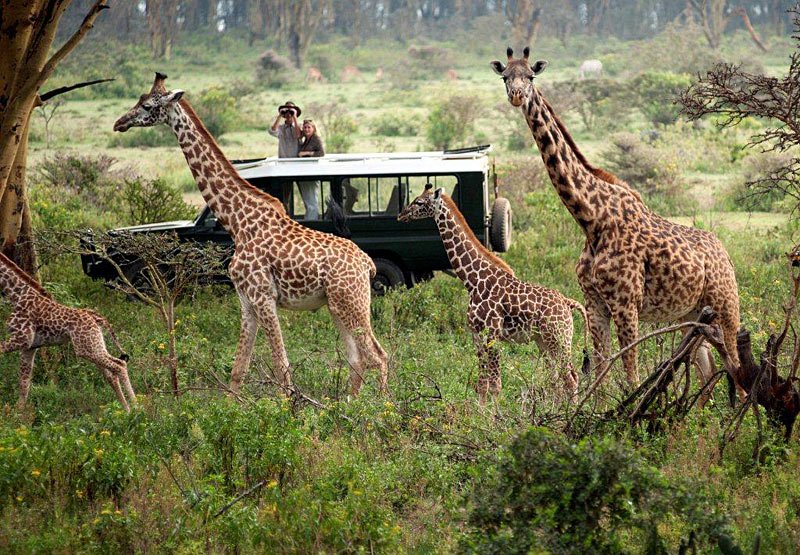 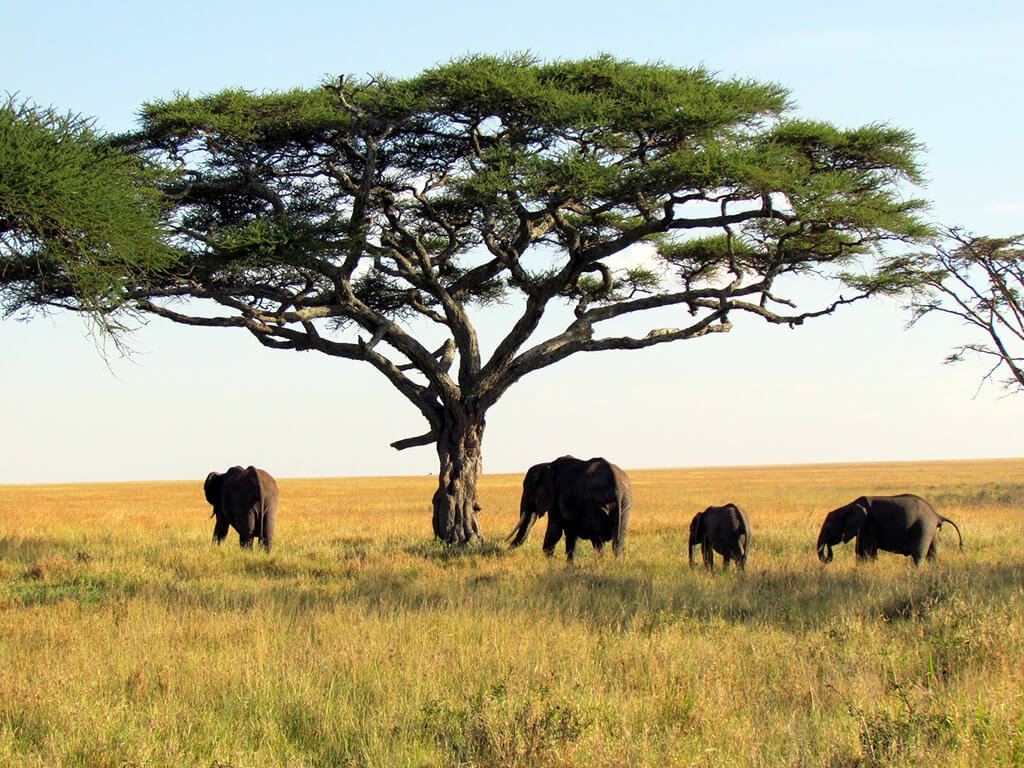