The greatest movement of wild animals in the world, the great wildebeest migration, happens in a region of about 1000 square kilometers in Tanzania's Serengeti National Park and cross over into Kenya's Masai Mara National Reserve and later turn back to do it all over again every year. What makes a million wildebeest get up and move at once? What is the sense that triggers them to muster the energy to begin a 1000 kilometer trek—to somehow know that it’s the right thing to do? Those questions are why millions of travelers flock the Serengeti-Mara triangle to find answers and witness Africa’s greatest wildlife show and the largest mass movement of mammals anywhere on the planet. Brace yourselfe, because we're about to give you a sneak peak into what you would experience on one of our Masai Mara Migration Safaris.

The number of Wildebeests and Zebra that participate in the Great Migration vary annually, but it's estimated that herd sizes can reach 1.5 million wildebeest, not to mention just under a million zebras, topi and eland. Waves of zebras arrive first, mowing through the tall, coarse grass stems that shot up during the rains, and exposing the green leafy grasses preferred by the wildebeests following behind them.

While the great migration route changes every year, the herds will inevitably have to cross the Mara and Talek rivers. When they reach the river banks, the herds stall hesitantly, knowing full well that Nile crocodiles lie in the waters waiting. While there is safety in numbers, the herd will be thinned as thousands are eaten, crushed or drowned in the crossings. Those that do make it to the other side are not in the clear. Lions wait in ambush, with scavengers such as hyenas and jackals eyeing good pickings. There are also cheetahs hiding out in the short grass plains, and leopards silently waiting in the treetops.

Predator kills are common during the great migration, especially in the early morning, late afternoon and during the shelter of night. But no matter how many African safari videos you may have already seen, nothing can prepare you for this raw display of nature. The hairs on the back of your neck stand at attention, and an emotional mix of awe and sympathy takes hold. Most of the times the prey is caught unawares and other times, the struggle to survive is fierce and even inspiring. But when death does take hold in the wild, it is anything but a pretty sight. 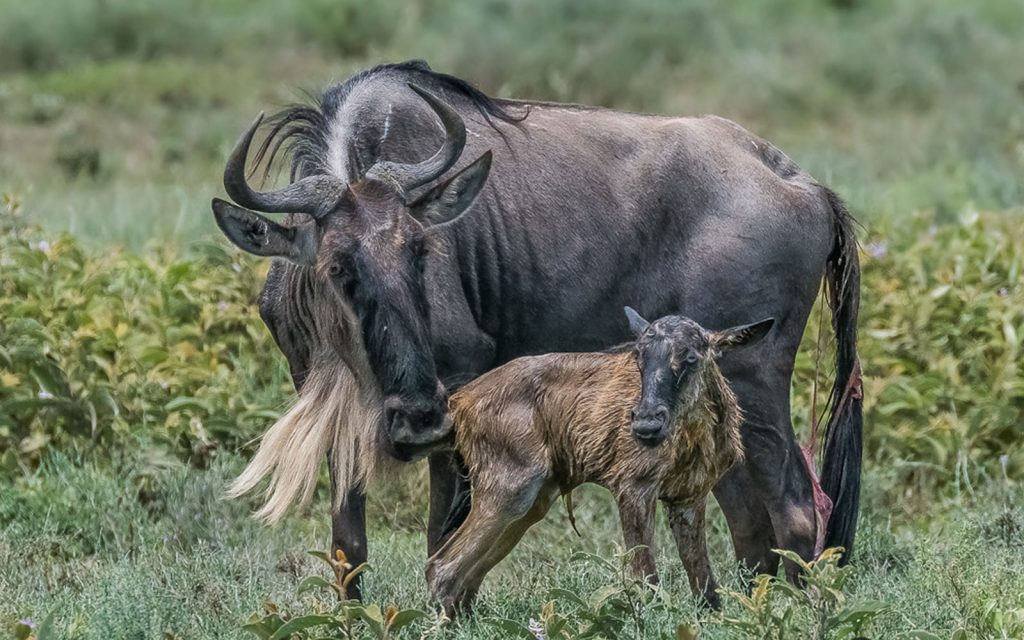 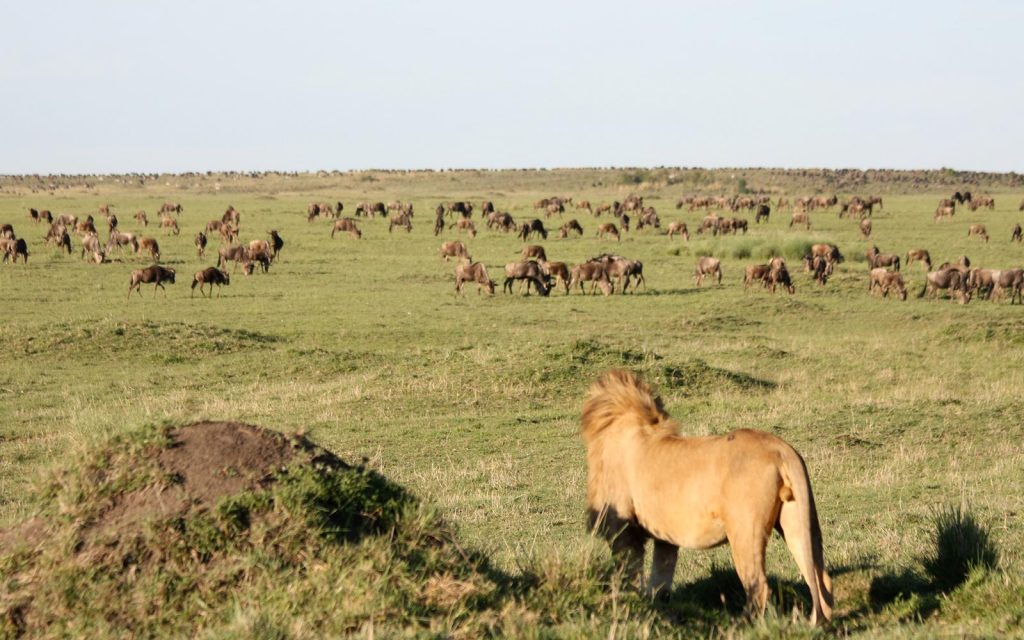 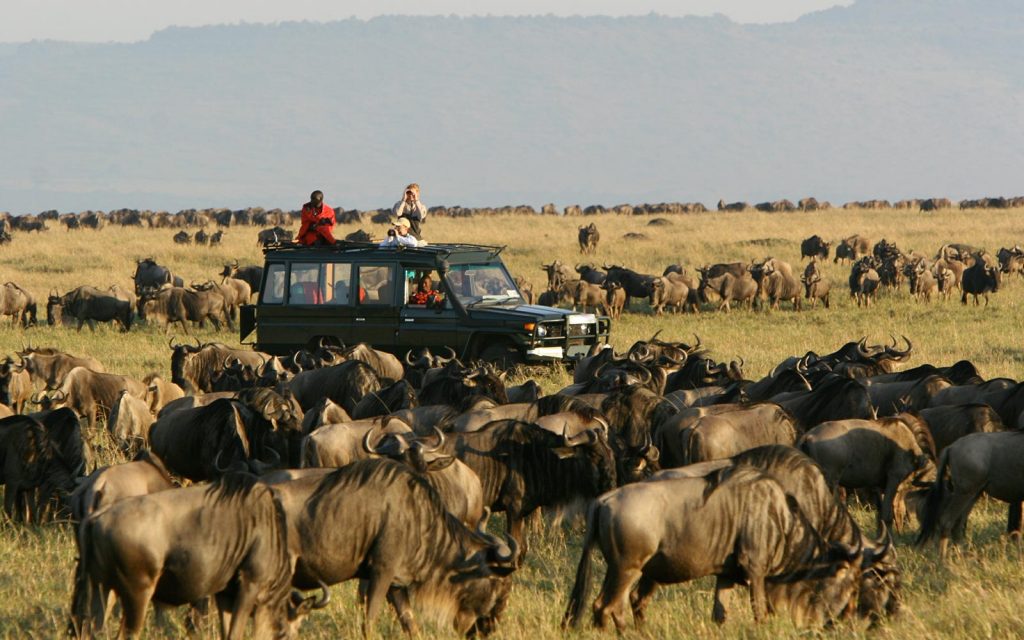 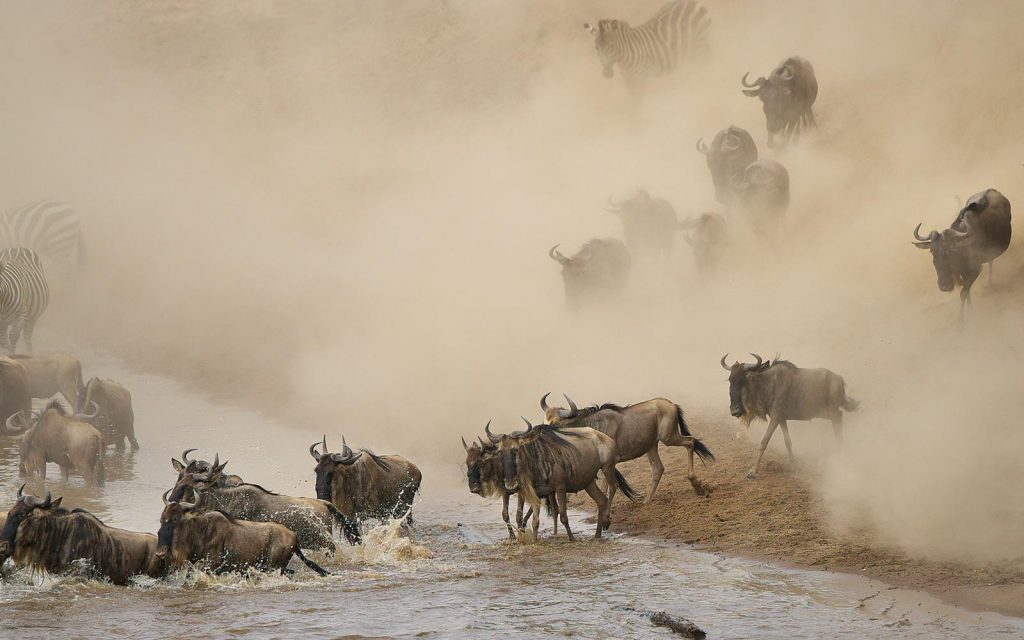 The Unfolding of The Great Wildebeest Migration

By early June a gentle wind ripples through the tall golden savanna grass, and the only animals easily visible are the slow moving elephants herds, giraffes, or a lone antelope chewing away its meal in quietness. A stillness sits across the savannah and the lions of the plains lie in the shade of the acacias, waiting in anticipation.

One late morning, small specks of dust rise up through the bushes by the sand River and within minutes become clouds of dust. A herd of a few hundred wildebeest swarms its way along and then down the dusty river bank. Some of the herd settles for a few sips of water before the throng returns and takes the thirsty back to the top of the river bank. The migration has arrived. Within a couple of days many herds of thousands of wildebeest are trampling their way through the long grass, snaking their way across to look-out Hill and then down to the Mara River.

Many visitors only want to see the migration river crossings but the true spectacle of the migration is 1,500,000 wildebeest, a million Burchell's zebra, eland and Thomson's Gazelle filling the entire stretch of landscape. The shifting columns of the herds as they traverse the valleys and the hills can only be watched in awe. There is no wildlife spectacle like this on earth.

Lets take a look at the annual migration cycle:

Dec to Mar — New members of the herd

By December, the lure of the rains and a taste for fresh, sweet grass leads the wildebeest to gather on the southern plains of Tanzania’s Serengeti National Park. You know those iconic photographs that grace the cover of National Geographic of the vast, emerald-green plains dotted with throngs of animals? Well, that’s happening right now. The majority of female plumb wildebeests are preparing to give birth and after a feast of nutritious grass in January, birthing season begins in earnest in February and March. The fertile females usually drop their young within a few weeks of each other and the plains heave with almost half a million new, fluffy lives. It’s an incredible spectacle to witness, but prepare for some violent scenes too for the predators are never far away and it’s almost as if they know they’ll have easy pickings from the young.

December to March is typically a rainy time in Tanzania and the showers are at their heaviest in December and at the beginning of January. By mid-January, the rains lessen and Tanzania enters a mini dry season so if you have dreams of a blue-sky-filled Great Wildebeest Migration safari, don’t shun this time of year and the magic of the birthing season just yet (but do still bring a rain jacket, just in case).

As the rains come to an end in the southern Serengeti and the grasses start to dry and shrivel, the beasties start their trek to the next destination — the north, in search of fresh grass. Throughout this middle section of the year, you’ll spot mega-columns of wildebeest, stretching all the way from the southern plains through the central section of the Serengeti and into the west as they begin the mammoth trek. April and the beginning of May see the beasties congregating in the central areas of the Serengeti around the Moru Kopjes, and if you’re lucky, you’ll spot the battling males as they fight fiercely for a mate. By the end of May, most of the herds will have reached the Western Corridor of the Serengeti and the Grumeti Reserve. It’s here that they gather on the banks of the Grumeti River to face the first real challenge of the trek: crossing the water.

Tanzania enters the ‘long rains’ around April and they continue into May so this is a wet time of year. Some of the mobile camps may close as the ground isn’t solid enough, so choose your accommodation carefully and make sure to book in advance. If this is the time of year that you would like to travel, pack a raincoat, a waterproof bag for your camera and go, go go!

It’s often said that the star of the Great Wildebeest Migration show is the river crossings during which the herds take the leap from Tanzania and into Kenya across the mighty Mara River. These are months of drama and exhilaration, chaos and commotion, and watching the wildebeest plunge across the water is undoubtedly some of the most exciting game viewing you’ll ever witness. Around 250,000 wildebeest die every year during the migration, the majority of them here, as predators roam the banks and crocodiles lie in wait. In June, most of the herds are plodding towards the river and beginning to gather on the northern plains of the Serengeti. The action really gets going in July when the first crossings take place and the watery stampede continues into August and September when the wildebeest regroup for a short breather on the Masai Mara side of the river.

June to November is considered the dry season in these parts and picture-perfect, cloudless skies and plenty of sunshine are the name of the game. June and July are the coldest months in Eastern Africa and the mornings and evenings in particular can be a touch chilly so a scarf and gloves won’t go amiss in the dawn chill. From August, the temperatures get steadily hotter until November when the spell is broken by the first of the rains. Great weather and iconic game viewing and a pretty good time to visit.

Oct to Nov — The return journey

The drama isn’t over yet for the poor wildebeest and their migration party, however, for they must return from whence they came: Tanzania. And so, in October, the action starts up again as the wildebeest face the second crossing of the Mara River and back to the northern plains of the Serengeti. As November rolls around, so do the thunderclouds in the distance and with a sniff of the air and stamp of the ground, the wildebeest are off to find the fresh, green shoots of the south. Thundering through the eastern section of the Serengeti and flooding the central area once again, the beasts arrive safely back in the southern Serengeti in December – and the cycle is complete.

WHERE TO WATCH THE GREAT ANNUAL MIGRATION 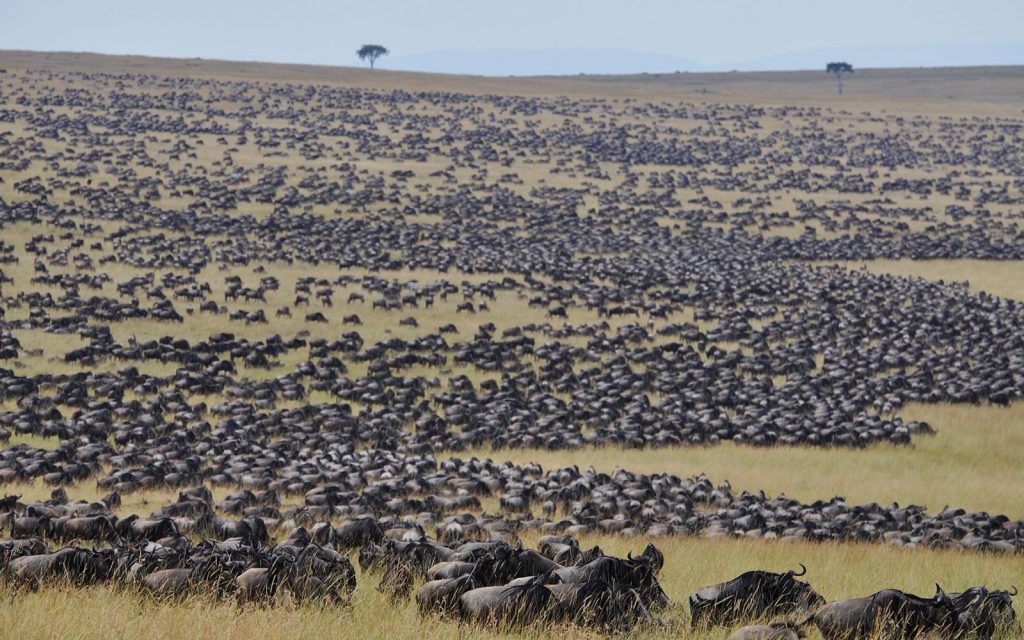 The Masai Mara: possibly the continent’s most loved and most loathed wildlife reserve. It’s the Africa of storybooks, where long-limbed Maasai traverse the glorious plains, the wildebeest of the Great Migration plunge across the river in a show of life and death and there’s a different animal around every corner. But sadly, in some parts, there’s probably a minibus stuffed full of khaki-clad highly motivated tourists around the corner too. 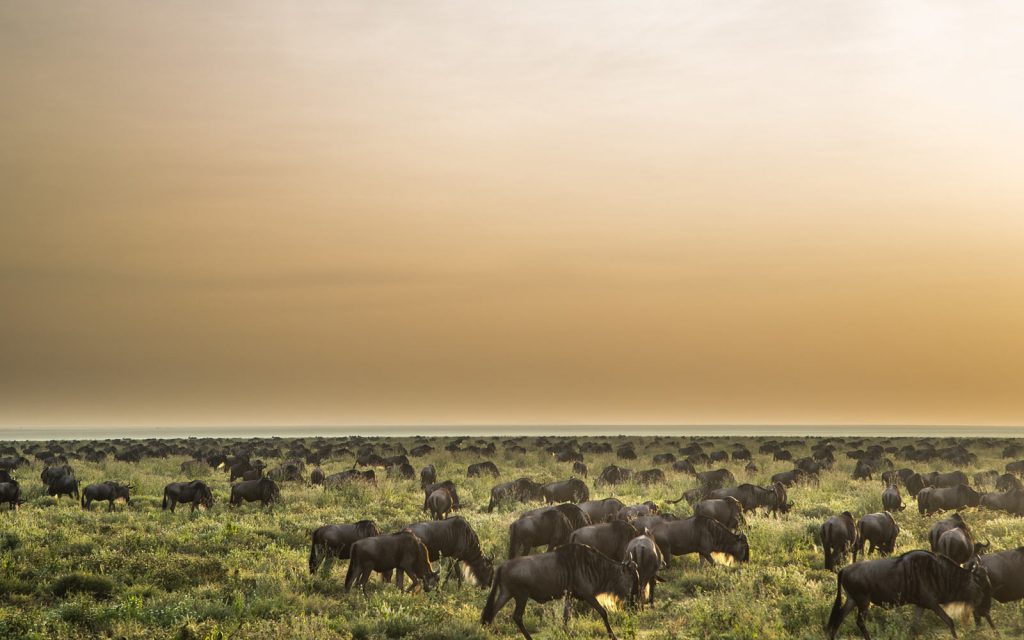 The northern Serengeti regions are probably some of the most popular in Africa and accommodation is plentiful and superb. There’s everything from movable tented camps and simple, genuine lodges to the swankiest of retreats, just made for a spot of R&R. In this peak migration season, however, the areas both get busy and we cannot stress enough just how far in advance you should book to secure the top spots. 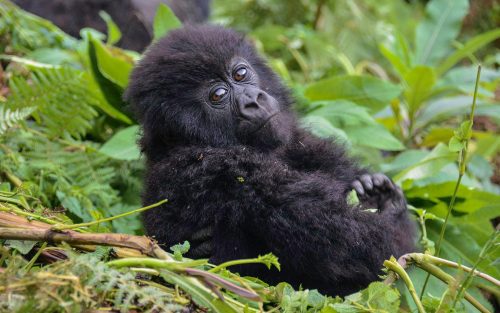